Things have been busy since my last post.  Busy is better than boring, but sometimes I need time to take a breather.

Friday, I got my hair cut.  It's shorter than it has been in quite awhile.  I do like it though.  Less shampoo, more curls, and much lighter for this summer heat.  I can make a pony tail and not have a bunch of hair touching my neck. A plus side is that my boyfriend likes it (or at least he says he likes it).

Friday was one of those hot days.  It hit at least 103 outside.  And that was the day I had to go to town.  Luckily, I packed Gatorade on top of ice water.

Friday was also my Bible Study's Movie Night and potluck.  We had plenty of food and lots of laughs.  Most of which were at my boyfriend's expense.  The movie we selected was Signs.  It has plenty of points for discussion.  Overall, I'd have to say that the night was a success.

Saturday was spent with my boyfriend.  It was another hot day so we had to stay in.  We did dinner and watched Secret of Nimh.  Sometimes it's nice to relax and watch those childhood classics.  I don't think we ever truly outgrow them.

Sunday was Father's Day.  My mother and I had brunch with my grandfather.  We brought Mick with us.  It's funny seeing my grandfather with that little dog.  They really adore each other.  So Mick got spoiled as well as Grandpa.  My mom and I headed home after brunch and I took a long nap.  I think having days of stuff back to back really takes it out of me.  I woke up in time to have a weekly call with my dad.

Monday was an appointment with my CF clinic.  Apparently the flu really did take it out of me.  I lost five pounds and my lung function is down again.  So now I'm back to square one trying to get the weight back on.  I'm back to square one on exercising.  And because it's summer I have to work extra hard to stay hydrated.  Maintenance is a full time job.

My boyfriend has offered to help me with the weight gain and exercise.  I've decided to see what ideas he can come up with.  He might think of a few things I never thought of.   I do foresee some extra peanut butter shakes in my future :o)  Right now, I am trying to eat every three hours.  Sometimes it's just a small snack, but it's something.  That's every three hours while I'm awake.  I'm not setting alarms at night to eat.  And because of the heat, I've been eating plenty of ice cream.  The funny thing about trying to gain weight is that I'm craving apples.  So I'm thinking of picking some up and eating them with peanut butter.  I know it's not a ton of calories, but if I don't give in to my food cravings I can get moody.

Tuesday was Bible Study.  It was fun, lots of food.  My boyfriend had the night off so we had some one on one time afterwards.  For us those times are a rarity.  So we take them when we can.

Today, I relaxed.  My body needed the rest.  Besides, it was too hot outside to do anything.  I should get a kiddie pool set up so I can just relax outside in cool water.

It's time to eat again.

Posted by Fight To Inhale at 10:13 PM No comments:

Hot Days of Summer Have Began

Talked to my doctor, since I'm back to coughing and being short of breath.  That flu really took it out of me.  I don't want to go back to the hospital this soon so he agreed to have me try some oral antibiotics for a few days.  If that doesn't work than it's back to IVs.  So I am currently on three meds that say to keep out of sunlight.  So it looks like I'll have to hold off on getting some colour back on this skin.

Had to put the AC on before noon today.  I hate hot days.  I don't like the heat.  I can't keep up on hydration, the air is hard to breath, and I become a walking salt lick.  The other bad thing about the heat is that I don't get hungry.  I'm hungry when it's cool, but when it's hot I want nothing to do with food. I just want to cool off.  The not hungry part is hard since I don't have any weight to spare.  Normally, when the weather heats up, I keep a supply of ice-cream on hand.  It's cold, cools me off, and helps with the calories.  Probably not the healthiest meal choice, but it's better than not eating.  Once the suns goes down and things cool off a bit my appetite returns.  This equals a lot of midnight and 3am snacking.

And then there's hydration.  During the summer I tend to lose more water than I put in.  It's not for lack of trying.  On really hot days I need about 20 glasses of water/Gatorade just to ward off dehydration.  I'm not kidding, my doctors and I actually measured it.  That is a hard goal to reach each day.  No wonder I don't get hungry.  I'm too full of liquids to eat.

I still haven't figured out this whole eating in the summer thing.  Maybe I should get a pool and eat all my meals in nice cool water.  Seriously, though I do wonder how other CFers beat the challenges of a hot day.

It seems that the warm weather is here to stay.  That means packing away all the winter blankets and just sleeping under sheets.  That also means camping weather and trips to the coast.  I'll take any excuse to visit the ocean.

As for today, I think I'm going to sit under a fan and read a book with a bowl of ice cream.

For updates on my transplant journey click here.
Posted by Fight To Inhale at 2:34 PM No comments:

Back from my trip to Roseville. Saw Wicked on Friday.  It was my 30th birthday present. A year's wait and was totally worth it. I wish I could tell all about it, but I don't want to ruin the show for anyone who is planning on seeing it.  I will say, my sister got us awesome seats. We had box seats. The view was great. And the costumes were so cool.  The music was great. It was definitely an amazing night.  It had been over 10 years since I had last seen a show. 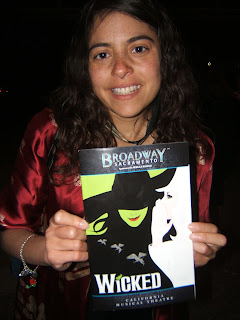 Before we went to the show, we stop for food.  We ended up going to this Asian place in downtown Sacramento.  It was a short walk from the theatre. The food was good and the prices were reasonable. My sister got my brother-in-law to eat a chili which rendered him unable to taste for a while. I got a rice bowl. It was bigger than my head. 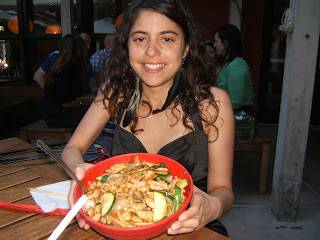 After we ate, my sister hung out at Capital Park for a while.  It was across from the theatre.  We had close to an hour to kill before the show.  The park is a beautiful place to hang out.

Saturday evening my family and I went to a jewelry fundraiser for COTA.  The jewelry was pretty nice.  My sister bought a few pieces.

Sunday was the first time I got to see my boyfriend in two weeks.  I had gone to Stanford and then got sick, so we hadn't had any one on one time.  A lot of phone calls but nothing face to face.  We met up at church and had lunch together.  I'm lucky, my boyfriend likes Mexican food so when I'm craving tacos he's all for going out and getting some.  As long as he gets to have a burrito, he's a happy guy.

Today, I've just been relaxing and snacking.  Too hot for a big meal, but small meals seem fine.  Plus I get to eat lots of ice cream.

So, I didn't get to blog as soon as I returned from Stanford like I had planned.  I wound up sick.  I actually started getting sick on the way home.  First it was non stop hacking.  I thought I was having some weird asthma attack.  No way I could be sick.  I cleaned everything before I touched it.

By the time I got home, I had a fever.  There was no denying it, I had my mother's bug.  And it was horrible.  I was hot, then I was freezing.  I was coughing so much my abs and ribs hurt.  Nothing was coming up.  My throat hurt, my head hurt, my eyes burned.  I felt like a rag doll that's been thrown around.  My legs were killing me.  And I was so exhausted.

I locked myself in my room and mostly just slept.  I didn't have energy for anything else.  I mean eating was exhausting.  If I checked my email I'd be too worn too answer.  This was one crazy bug.

The fever didn't break till either Thursday night or Friday morning.  It's been a slow recovery process.  My cough is still pretty rattly and I only have enough energy for basic things.  This was not a bug to catch.

I'm spending the rest of the week resting up.  I want to be as well as I can get by Friday night.  My sister got me tickets to see Wicked and I have been looking forward to it all year.

I spent my sick time basically cut off from the world (hard to do much when I keep falling asleep).  I did wind up with one of those "I can't believe he did that" moments.

On Monday I was getting my morning treatments out of the way.  My sister and her boyfriend went out for a bit.  I didn't think much of it.  When they returned, my sister's boyfriend said, "You got mail _____" I figured he wasn't speaking too me since _____ is a nickname my boyfriend gave me and no one else knows that.  So my sister comes in and says "_______ you have mail," and she tosses a letter at me.  And there on the envelope in my boyfriend's handwriting is ___________.

Hopefully everyone else's week has fared a lot better than mine.
Posted by Fight To Inhale at 6:19 PM No comments: