I hope everyone is enjoying this beautiful Memorial Day.  Make sure to thank at least one of our country's service members.

My weekend went fairly well.  I'm dealing with the fact that I'm feeling tons better since my hospital stay that I want to do everything.  So I'm having to remind myself to slow down and take a break.

Friday night was dinner with some friends from my Bible study.  My boyfriend was sweet enough to arrange a ride for me that day since I didn't have access to a car.  After dinner we went and watched the latest Muppet movie.  It was funny in that cheesy sort of way.  Definitely, Muppet style.

Saturday was a relaxation day.  Basically means I stayed home, did some laundry, and worked on some writing.  My mom came home really sick that night.  Some sort of bug.  I feel bad, I want to help her but most bugs send me back to the hospital.  So I've been staying holed up in my room.  Not to worry I have plenty of supplies to get me through this epidemic :o)  Actually, today my mom is sounding better.  She still has a nasty cough.  So I'm guessing another day of rest is in her future.

Sunday was a bit of a treat.  My boyfriend and I joined some friends for a picnic in the park.  The mild weather made it a perfect day.  We even found a tree with moss in shape of a heart.  And I had never been to that particular side of Bidwell.  It was neat seeing different spots for swimming.  And the way the park is set up, there can be tons of people there and you still feel like you're having a private get together.


I think one of the highlights of the day was that my boyfriend got me first bouquet of flowers (from a boyfriend).  They're daisies dyed in my favorite shade of blue.  He hid them at the church and presented them after service.  Definitely one of those "Awww" moments.  I really want to take them with me to Stanford this week. 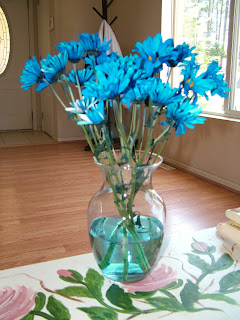 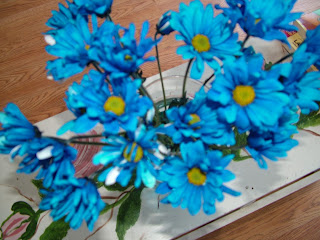 That is it for today.  Next time I blog, I should be back from Stanford with some more interesting quips about medical staff.
Posted by Fight To Inhale at 3:21 PM 2 comments:

The Crazy Month Of May

My fiftieth post!  Such an occasion calls for cake or maybe blackberry pie.

I know I said I would be updating more often in my last post.  Things have just been hectic. I've been trying to balance my normal responsibilities with having a boyfriend.  It's a slight challenge considering we live a 30 drive from each other.

I went on a hike at the end of April.  I really enjoyed it.  Been a while since I was out hiking. Went through an entire Oxygen tank.  My boyfriend was really sweet and super patient.  Even with the oxygen, I had to take several breaks.  Since my pack held my tank, my boyfriend had to carry enough food and water for the both of us as well as a spare tank.  He didn't complain.  The area we went to was called Table Mountain.  Picked a great day for the hike.  The weather was mild and there was lots of green.  The place looked how I imagine Middle Earth to be.

We made it to one of the waterfalls.  To get there required a climb down into this ravine like place.  Was worth it.  There was lots of shade and places to sit and rest before continuing on.  And the waterfall was beautiful.

My boyfriend and I left our hiking group early since I was running low on oxygen.  Near where we parked was this large tree so we waited for our friends there.  We got some cute pictures while waiting.  It was a great day. 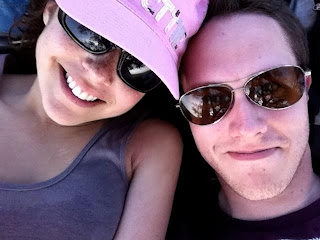 My boyfriend and I went to the midnight showing of Avengers.  If you still haven't seen the movie, I recommend you stop reading this and go right now.  It was great.  Especially, for someone who enjoys superheroes.

The first weekend in May I went on a Ladies Retreat with the ladies from my Bible study.  We were up at Lake Almanor.  And it was beautiful.  You could see Mount Lassen.  I was pretty amazed at snow still being up in the mountains, since we were already getting swim suit weather at home.  The ladies retreat was fun.  We did some Bible study, worship and got to know each other better.  One of the ladies made this amazing stir fry that I am planning on requesting the recipe from her.  Might help with the weight.

After the retreat was my doctor's appointment.  The good thing was my weight was staying steady, bad news was I couldn't breathe.  So I went back to the hospital.  I was there for a week.  I did try to blog there but my nook wasn't letting me on the site for some reason.  I need to get the hang of that thing.  I got it so I can keep up with my writing without lugging my laptop around.  And that's the part that doesn't want to work.

For the most part my stay was uneventful by way of crazy staff.  The only problem I had was the attending brought a bunch of medical students into my room one morning and then asked if they could all listen to my breathing.  I told her (in front of the students) that I wasn't a circus attraction.  I would have been fine if it was one or two students but a whole bunch of them.  And she didn't check ahead of time to see if I was okay with it.  She just brought the students in and then asked.  I felt like they were trying to intimidate me into allowing everyone to "take a listen."  I don't think I scored any points with her.  After that though, she did only bring in two students at a time to see me.

The hard part about this hospitalization was that everyone was busy with work or school or they were sick so I only had two days when I got visitors.  That part was a little depressing.  The up side was that since my boyfriend couldn't make it to visit he sent a care package.  It was super sweet and contained things that I like.  So if your CFer ever ends up in the hospital during a time you can't visit, send them a care package of things they'd appreciate.  Include some good snacks as well cause the food sucks.

When I got out of the hospital, I was sent home with IVs.  Somehow the attending wound up ordering Zyvox as a suspension instead of a pill.  The suspension is nasty.  It takes willpower to not spit that stuff out.  So I had to endure that tastebud torture.

On Saturday my boyfriend and I celebrated our Monthaversary.  It was sweet, he made dinner and dessert and then we watched Underworld.  Cause nothing is more romantic than vampires and lycans trying to kill each other.  Actually, we both enjoy Sci-Fi and Fantasy.  And Underworld is a movie we both agree on.

This past Tuesday, I had an awww moment. In honour of cystic fibrosis awareness month, my boyfriend had gotten both of us purple cf bracelets.  That in itself was sweet.  On Tuesday when I had gotten to Bible study I saw several other people wearing the purple bracelets.  He had asked a bunch of people to wear the bracelets for the month.

I think that pretty much catches us up for now.  I have an appointment with the transplant clinic next week and another appointment with my CF doctor in mid June.  And between all that, I want to get some more bike riding in.

I hope everyone has been wearing purple in honour of cystic fibrosis awareness month.  If you haven't, you still have the rest of May to wear it.

Posted by Fight To Inhale at 3:43 PM No comments: